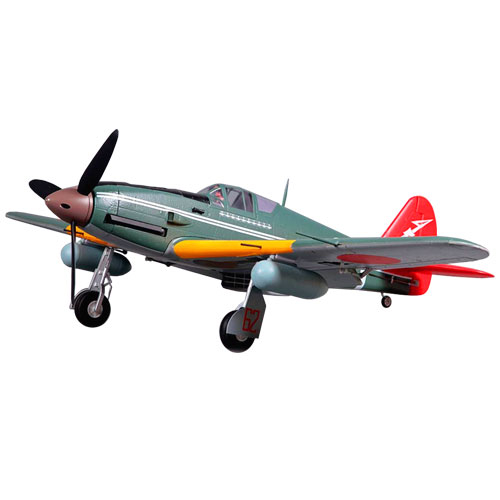 The third of FMS's mighty 980mm series aircraft has arrived! The KI-61 is, like the 980mm P47 and P-40, is definitely a head turner! If you love warbirds and enjoy the excitement of heart-pounding speeds,this aircraft will satisfy both of your desires! The stock 3 bladed props, 3648 brushless outrunner, 4 cell battery and 60A ESC means that the Ki-61 can attain speeds of up to 100mph+. Be ready to turn heads with the awesome 995 mm Ki-61!

The Kawasaki Ki-61 Hien (, "flying swallow") was a Japanese World War II fighter aircraft used by the Imperial Japanese Army Air Force. The first encounter reports claimed Ki-61s were Messerschmitt Bf 109s: further reports claimed that the new aircraft was an Italian design, which led to the Allied reporting name of "Tony", assigned by the United States War Department. The Japanese Army designation was "Army Type 3 Fighter" . It was the only mass-produced Japanese fighter of the war to use a liquid-cooled inline V engine. Over 3,000 Ki-61s were produced. Initial prototypes saw action over Yokohama during the Halsey-Doolittle Raid on 18. April 1942, and continued to fly combat missions throughout the war.

There are NO reviews of the FMS 995mm KI-61 KAWASAKI ARTF w/o TX/RX/BATT HIGH SPEED yet!
Be the first to write a review